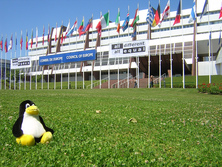 There are a few open source operating systems like BeOS, various BSD ones and Unix of which Linux is the dominant one. Linux itself is the base upon which many distributions are built. Linux is found many places such as running the majority of servers on the internet, in embedded devices, household goods, mobile phones and also in satellites in outer space.

With regard to computers there are many different distributions in use such as Ubuntu, Centos, Debian, OpenSUSE, Fedora, Slackware and a host of others, many of which are lightweight and fast or suitable for older slower computers. These very pages are being built using Linux Mint.

The software choices within Linux are enormous with thousands of applications available. Very recently a number of games manufacturers have started issuing their games to Linux.

There are other pages describing a small selection of open source software. Any newcomers to Linux have a host of resources available to them on the web and also through a worldwide network of Linux users groups.

To be added to..
Powered by

Create your own unique website with customizable templates.
Photo used under Creative Commons from notfrancois